Hear our voices
Our conservation successes and lived realities are not 'myths'
Our conservation knowledge, experiences, viewpoints and aspirations must feature in debates affecting our lives
Fishing is an important source of sustenance and livelihoods for us who live alongside southern Africa's watercourses
Hunting, fishing, sale of wild products and tourism supplement our livelihoods beyond agriculture
Successful conservation is dependent on us who live with our valued wildlife
Our natural resource heritage broadens tourism employment opportunities for young women and men
Daily chores like fetching water can pose dangers from elephants invading fields and predatory hyenas and lions
Children and adults alike are killed by elephants in fields and predators like hyenas
Rural and urban youth engagement is key to the future of nature and biodiversity
Rural development must prioritise investment in youth to boost economic resilience
Income from sustainable use of natural resources contributes to our children's access to health and education
In the absence of sustainable natural resource use rights, the alternative is land uses that destroy our treasured landscapes and wild resources.
Economic and social justice demand that ownership, access and use rights of natural resources are accorded regardless of gender, age or location

Resource Africa supports rural African community efforts to secure their rights to access and use their natural resources in order to sustain their livelihoods. We help to build strong platforms for collaboration, knowledge, skills sharing, and joint advocacy to ensure community voices are heard in debates that materially affect their lives.

We believe that when rights are upheld and incentives for conservation are provided to those who live with wildlife there will be positive conservation outcomes benefitting people and nature.

Our News Our Voices

PRESS RELEASE: African Conservation and Human Rights Advocates urge European Politicians not to be misled about trophy hunting Advocates for human rights and conservation in Africa have warned that bans... 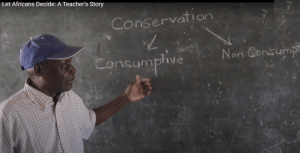 Open Letter: Resource Africa urges European politicians not to be misled about trophy hunting In this open letter, Resource Africa  challenges the German Green Party Alliance ’90/The Greens on their...

Resource Africa is excited to announce the appointment of Leslé Jansen, our new Chief Executive Officer for Resource Africa Southern Africa. A lawyer specialising in Indigenous Peoples in International Law, Ms. Jansen brings to RA over 15 years' experience working with local communities on resource and related rights as these relate to environmental and social justice across southern Africa. She brings a wealth of experience and insight to RA from her perspective as a South African who identifies as indigenous, as a lawyer skilled at negotiation and policy, and her knowledge of the southern African region in particular, and indigenous and local communities across the African continent.

“It is partly my indigenous identify that drew me to law and specifically to indigenous resource rights. This is where I have spent the last eight years to ensure indigenous peoples get recognition in some form from their knowledge, which was, and in some cases continues to be appropriated,” she says.

A major milestone in her career was, as one of a team of two lawyers, supporting a coalition of around 40 communities in South Africa to lay claim to high value traditional resource species such as Rooibos, and a share of the benefits. This was done in the context of the Nagoya Protocol policy framework on access to genetic resources and the fair and equitable sharing of benefits arising from their utilization to the Convention on Biological Diversity.

“Their [indigenous communities’] knowledge contributed to build successful industries. They were never recognised for this,” she says. The result was that key industries were brought into compliance with the Protocol and, as a form of restitution for some, the industry will pay a generational traditional knowledge levy to the communities who will set up community trusts to determine how the benefits will be shared and distributed. This has set a key precedent for other communities across the continent and the world.

Ms Jansen has a strong commitment to Africa and African issues, particularly as they relate to the spiritual, material and cultural meaning of the continent’s resources to its people that the world has benefitted greatly from. She is an indigenous expert member to the African Commission on Human and Peoples’ Rights’ special mechanism – the Working Group on Indigenous Populations/Communities in Africa.

“RA aligns very well with my personal ethos and what I hope to do in the world. I hope to learn in terms of their work with the struggles of communities for their resource rights. I want to add my weight in these struggles. I see it as a way of weaving the tapestry back in a way that communities can benefit from their resources and knowledge that they offer the world,” says Ms Jansen.
.

Mr Masango, from the village of Mahenye in South East Zimbabwe’s Manicaland Province, tells his story of how, over the years, he embraced the idea of safari hunting as a means of food and income to transform his community by combining hunting, photographic tourism and conservation awareness and action.

PRESS RELEASE: African Conservation and Human Rights Advocates urge European Politicians not to be misled about trophy hunting Advocates for human rights and conservation in Africa have warned that bans... 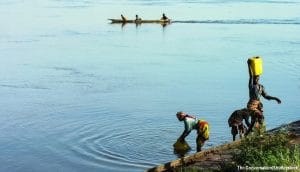 This day is used to highlight how important Africa is and that its value needs to be protected at all costs. It also aims to alert the world to the vulnerability of this heritage: there are 21 African sites on the List of World Heritage Danger. The preservation and enhancement of this heritage are essential factors in sustainable development, the only kind of development capable of meeting the complex challenges that face Africa today and include climate change, the challenge of education and the economy, and rapid urbanization. Mobilizing local communities, especially young people, around the safeguarding of the heritage, involving them in projects that place value on their cultural identity and natural environment, is one of the best ways of opening up prospects for the future and for development. It is in particular through training and education that this mobilization may eventually prove to be most effective.

21 May World Day for Cultural Diversity for Dialogue and Development

The day provides us with an opportunity to deepen our understanding of the values of cultural diversity and to advance the four goals of the UNESCO Convention on the Protection and Promotion of the Diversity of Cultural Expressions adopted on 20 October 2005: Three-quarters of the world’s major conflicts have a cultural dimension. Bridging the gap between cultures is urgent and necessary for peace, stability and development. Cultural diversity is a driving force of development, not only with respect to economic growth, but also as a means of leading a more fulfilling intellectual, emotional, moral and spiritual life. This is captured in the culture conventions, which provide a solid basis for the promotion of cultural diversity. Cultural diversity is thus an asset that is indispensable for poverty reduction and the achievement of sustainable development.

22 May BIODIVERSITY DAY "We're part of the solution #ForNature".

The international community is counting the days before the adoption of a new global biodiversity framework, based on negotiations that will take place during the year leading up to the UN Biodiversity Conference. Every remaining day before the UN Biodiversity Conference counts to make your voice heard loud and clear: Let the world know that you wish for a strong global biodiversity framework that will “bend the curve” on biodiversity loss. Let the world know that you care about your future! Biodiversity is the foundation of life. It underpins peoples’ livelihoods and sustainable development in all areas including agriculture, water provisioning, forestry, fisheries and tourism. We therefore need healthy ecosystems to achieve the Sustainable Development Goals. Such goals include climate change mitigation and adaptation, ecosystem restoration, cleaner water and zero hunger.

Get monthly briefs and updates on what is happening in the area of rights,
sustainable use and conservation direct to your inbox.
Subscribe
Wordpress Social Share Plugin powered by Ultimatelysocial