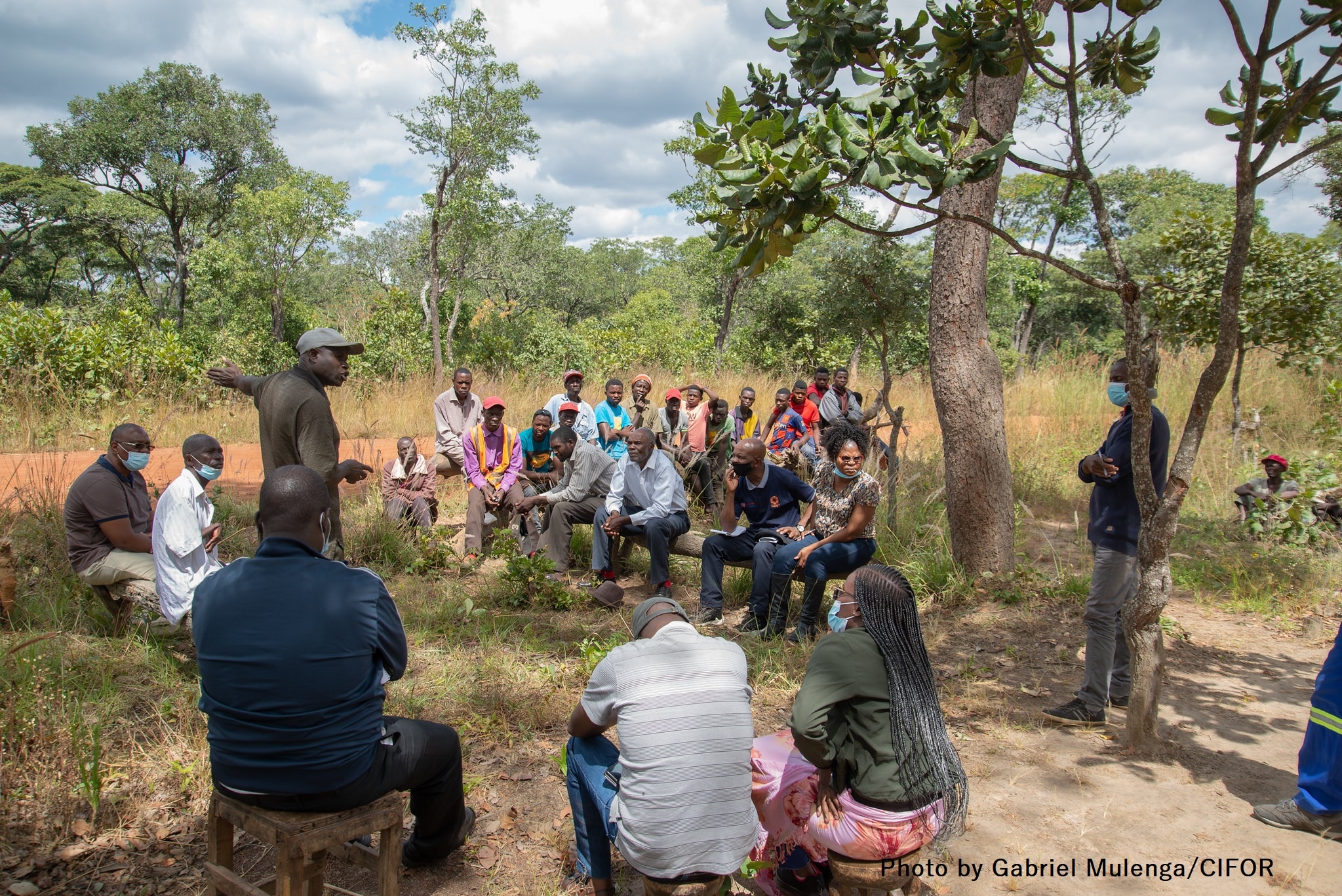 The commons and the theory behind community-based natural resource management

Prior to the modern industrial era, communities living on common-lands the world over (called commons) relied heavily on the abundant natural resources that surrounded them for their survival. In Africa, ancient traditions reflected the value of natural resources and incorporated nature in their worldviews, belief systems and practices.

Many traditional practices involved sustainably using their natural resources while strengthening their ability to adapt to changes in the ecosystem. One example is known as pulse hunting, where animals were hunted intensively during certain seasons and allowed to recover for the rest of the year. This traditional adaptive capacity could play a crucial role in adapting to modern day climate change impacts such as droughts and floods. Consequently, creating a modern system for managing land and resources that reflects these ancient traditions may promote climate resilience in Africa’s communal lands.

In theory, the commons is defined as “a shared resource such as (land) that is managed by a defined community of commoners in terms of self-determined norms, practices and traditions that commoners themselves devise for governing the commons.” The concept of the commons is believed to have developed in early England as a necessary part of the agrarian economy and the feudal land tenure system, whereby the land belonged to a titled lord but was used and managed by tenants.

In a similar fashion to the commons of medieval England, most of Africa’s communal land was collectively managed by traditional leaders such as chiefs and headmen. These traditional leaders had the power to allocate the land, to control the use of common resources, and confiscate land in certain circumstances. When the chief allocates land, he not only gives land to families but also dedicates certain lands for grazing and agricultural use. The decisions made by the chief are not made collectively, but are based on the customs of the local community members living in an area. Traditionally, many of their systems of governance included rules and procedures designed to regulate the use and management of natural resources.

Hardin’s “tragedy of the commons”

While commons provide essential services, they are often difficult to manage in the absence of effective leadership that monitors compliance to rules of use. When the established rules are routinely broken, this may result in a ‘tragedy of the commons.’ In 1968, Garrett Hardin coined the term tragedy of the commons as part of a larger argument about the overexploitation of natural resources due to human overpopulation.

To illustrate the structure of his theory, Hardin used an example of herders who use a common field, or “commons,” to graze their animals that will under stable conditions, add to their herds until the field is at capacity. At that point, adding an additional animal will still benefit the herder, but the resulting overgrazing will be shared by everyone and not solely by that herder. The benefits of adding animals thus outweigh the costs for individual herders. This leads to herders adding to their own herds until the common area, exhausted by overuse, can no longer feed the herds.

Hardin pointed out: “apart from grazing land, places like national parks and oceans are also susceptible to tragedy if there is overexploitation of resources in such commonly owned areas.” The tragedy of the commons concept has come to ”symbolise the degradation of the environment expected when many individuals use a scarce resource in common.” This is a reality in modern day communal lands around Southern Africa where there is no uniform land tenure arrangement and traditional customs related to land and resources have been eroded. Hardin proposed, “the tragedy of the commons may be averted through privatisation or government control of resources.”

Beyond Hardin: the evolution of the common-pool resource theory

Although Hardin’s initial theory was highly influential and popular, it has since been vigorously challenged in the scientific literature. Policy scholars in the mid-1980s began questioning the general application of models patterned after the tragedy of the commons. Elinor Ostrom emerged as a leading scholar who questioned the applicability of Hardin’s tragedy of the commons in the real world and laid the foundations for common-pool resource theory.

Ostrom undertook extensive research on commons in places as different from each other as Kenya, Nepal, Switzerland and the US State of Maine, among others. Using lessons derived from her observations of communities successfully managing their resources in these diverse contexts, she developed eight design principles for sustainable management of the commons. The principles are as follows:

(1) clearly defined boundaries of the group and land or resources they manage;

(2) a close match between the rules of resource governance and local conditions;

(3) those affected by the rules participate in making the rules;

(4) effective monitoring systems involving monitors who are part of or accountable to the community;

(5) graduated sanctions against those who do not respect community rules;

(6) conflict resolution mechanisms that are cheap and easy to access;

(8) multiple layers of nested governance responsibility from the lowest level (e.g. one village) through to the system level (e.g. whole ecosystem or country).

Although not consciously following Hardin’s theory, colonialists in Africa first created a tragedy of the commons by each individual overexploiting the continent’s natural resources for their own gain. The subsequent demise of African wildlife eventually triggered the establishment of National Parks in an effort to save what was left. This included the forced displacement of local community groups from their lands.

This led to the emergence of the “Yellowstone” or “fortress” model of conservation which is characterised by the privileging of tourists and scientists as welcome guests, whilst excluding local peoples via patrols, fines, and fences to enforce land use regulations. This approach follows Hardin’s basic idea that the protection and promotion of biodiversity is best achieved when nature is managed centrally by the government or on private lands (which were owned exclusively by colonial descendants). In many African countries, displacement was a consequence of oppressive laws which sought to prevent black land ownership and control of communal land. 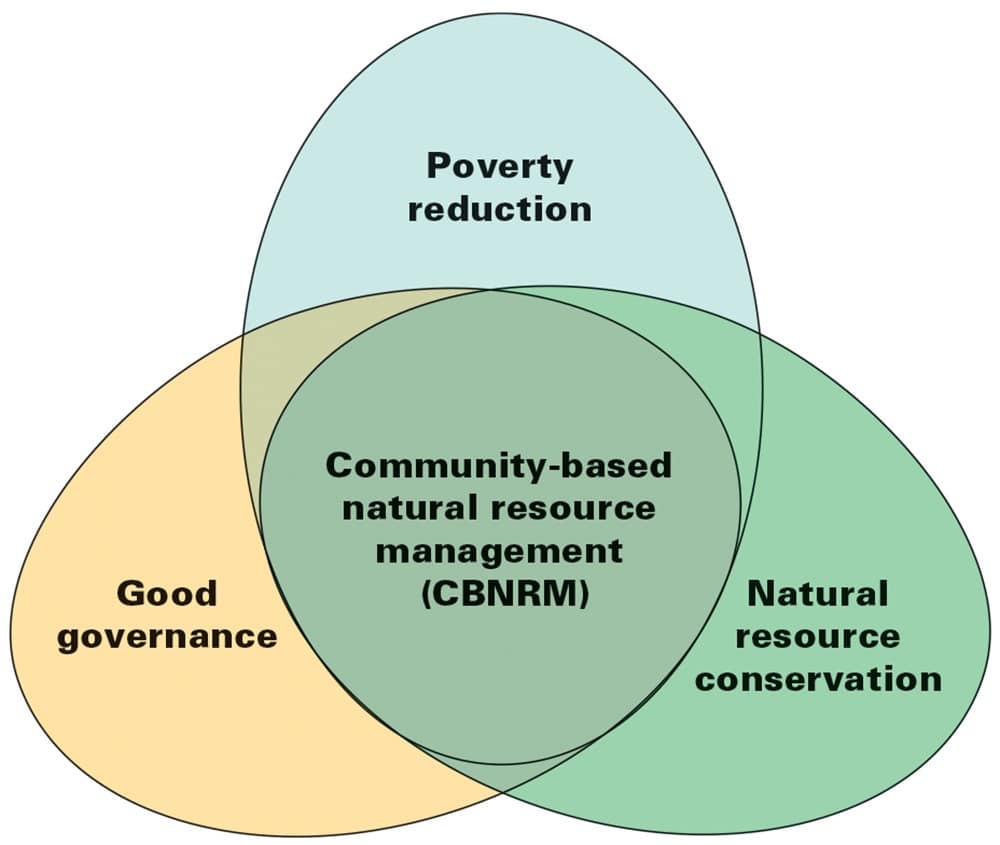 In the mid-1980s natural resource management agencies in southern Africa began to realise that they lacked the financial and human resources to effectively prevent resource degradation, thus challenging Hardin’s theoretical solutions to the tragedy of the commons. At around the same time, democracy found its way in southern Africa and natural resource management agencies experienced pressure from newly elected governments to consider the demands and pleas of local communities for greater recognition and improved access to ecosystem services. During the same period, social scientists began having an impact on the natural resource management debate and advocated a more people-centred approach. Their main contribution was alerting ecologists and range scientists of Ostrom’s common-pool resource theory.

Community-based natural resource management (CBNRM) is a concept that puts Ostrom’s principles into practice. Through CBNRM, self-defined communities that are formally recognised by national authorities collectively manage natural ecosystems within clearly defined communal lands. By establishing their own management systems, communities can make resource rules that suit their local conditions, employ monitors to check that all members adhere to these rules and apply some form of sanction to rule-breakers, usually in collaboration with local government authorities. These community-based institutions can collaborate with neighbouring communities and regional government bodies to create a nested system of governance. All eight of Ostrom’s principles should thus be implemented within a well-managed CBNRM programme.

The iconic Communal Areas Management Programme for Indigenous Resource (CAMPFIRE) in Zimbabwe provided the basis for extending the model of local management to communal lands. Marshall Murphree described the theoretical underpinnings of CAMPFIRE and CBNRM in southern Africa as “laws” of sustainable long-term CBNRM, many of which reflect Ostrom’s principles.

CBNRM is a means of managing the commons in a way that mimics traditional African governance mechanisms at the local level, rather than relying on command-and-control mechanisms of central government. It thus aims to avoid Hardin’s prediction of tragedy using principles set forth by Ostrom to guide the sustainable use of natural resources. In the southern African context where government resources are stretched thinly and formerly displaced and disempowered people are calling for restitution of their rights to resources, CBNRM is a promising way forward.

Chiedza Lucia Amanda Machaka holds a Bachelor of Laws from the University of the Witwatersrand, a Master of Laws in Environmental Law and Governance from North-West University and a Doctor of Laws in International Aspects of Law focusing on Environmental law from North-West University. Her research specialisations and interests are on the law governing communities living in and adjacent to state protected areas, indigenous peoples rights, social-ecological resilience and climate change. Prior to joining Resource Africa, Chiedza worked as a volunteer legal assistant at Ditshwanelo the Botswana Centre for Human Rights, a Project Coordinator for the Freedom of Expression and Access to Information program at the Centre for Human Rights at the University of Pretoria, a legal intern at Greenpeace Africa and a freelance researcher for Executive Research Associates